WELCOME TO MY BLOG

Over this past year, we have been working on producing a package containing a music video, digipak and website. I have learned alot about the changing music industry, and more specifically about branding and genre conventions of specific music videos.
On my blog you can find the complete final cut, digipak and a link to the website.
This year i have worked in a group with Sophie and Kristian.

Here is the full digipak I created: 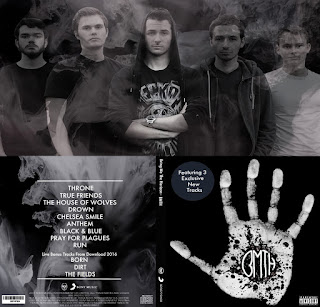 This is our final cut in which I have edited the last few details of the fast paced sequence. Since this was the only thing that was still missing, I tried out 4 different paces in Final Cut Pro, which you can see an explanation and a video on below

This is the final version of the digipak. 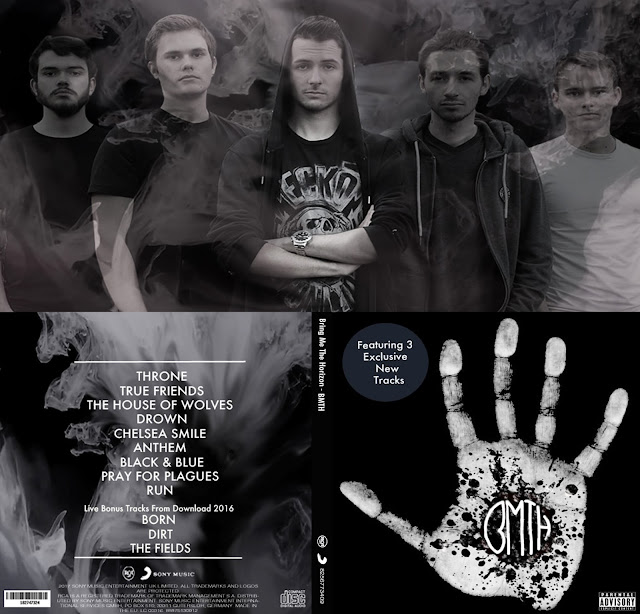 After getting feedback from my teacher, I have added the following details:
- I sharpened the opacity on the barcode to 100%. I did this because in every example I found, the barcode is sharp.

- I added some bonus tracks to the track listing. As this is a compilation album, it is important to add new unreleased tracks or new versions of songs in order for there to be a reason to buy it, as all the other tracks are on previous albums. The names for these tracks are "BORN", "DIRT" and "THE FIELDS" I like these names as they fit in really with the other grungy titles of their songs, and therefore also fit well with the genre.

-I made the "BMTH" on the spine a lot smaller and put it after the band name as this is much more common that it being before. I also added the SONY logos. and a catalogue number.

- On the front cover, I added a sticker that says "Featuring 3 Exclusive New Tracks" as this will draw attention to the new content and therefore attract the audience to buy the Digipak. I did this in a dark bluey/grey colour as I wanted it to stand out from the black and white colour scheme but also flow well altogether as a whole. 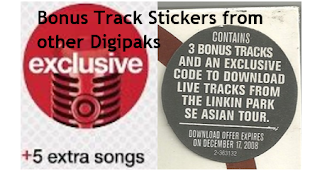 How do your products use or challenge conventions?


How did we use or challenge conventions?
(Vodcast)

This is the script I created for the vodcast: 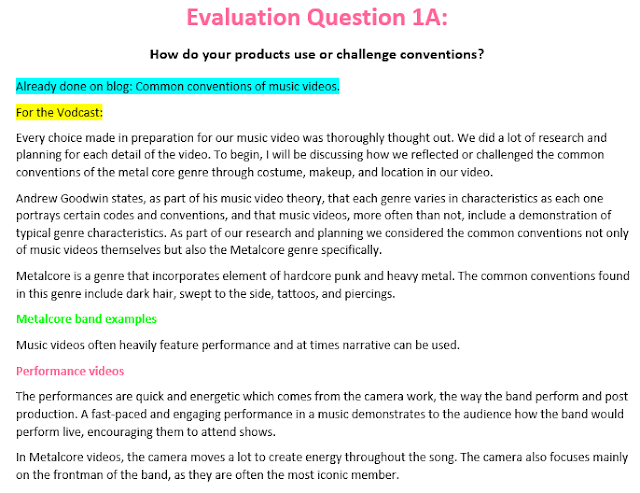 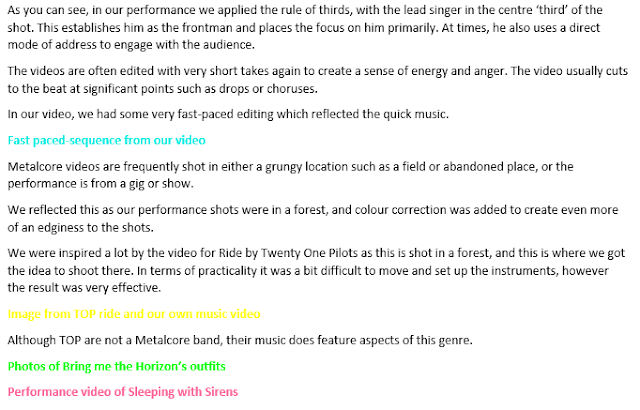 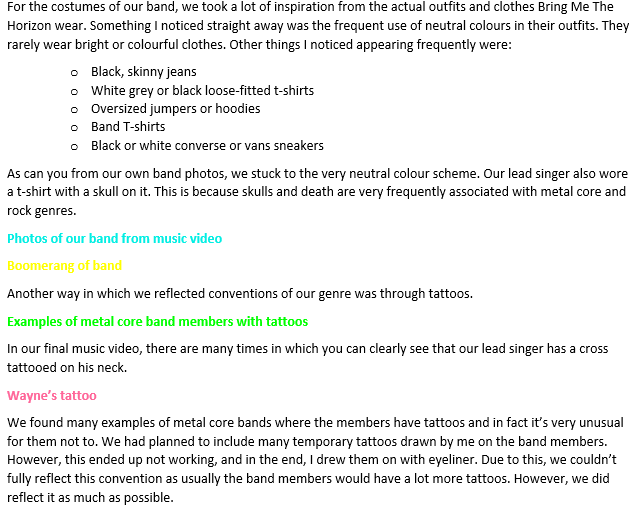 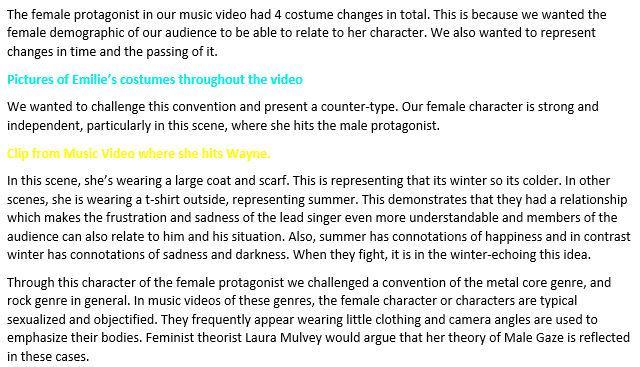 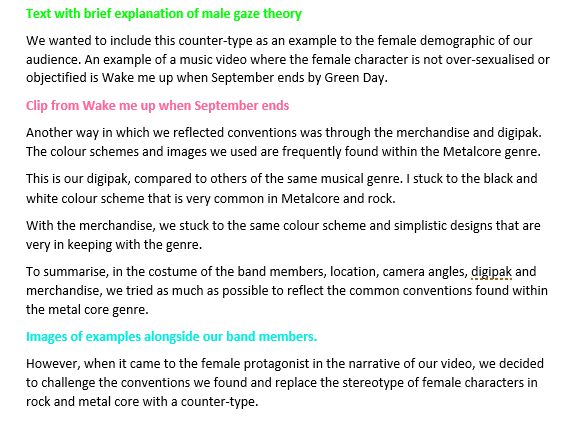 INTERTEXTUALITY IN OUR VIDEO

In our music video, there are a few cases of intertextual references.


Firstly, the underwater/swimming pool scene references and was inspired by 'This is Gospel' By Panic! At The Disco.

The lying position from this video is something that we have replicated in our own. It is also quite similar as there is a source of light shining into the water.

We also were inspired by 'Up in The Air' by 30 Seconds to Mars in terms of the colour powder. However, when we used the colour powder, we focused it on the drums and the end singer rather than a large group of people. 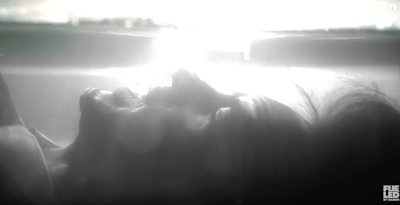 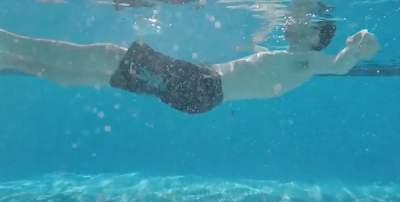 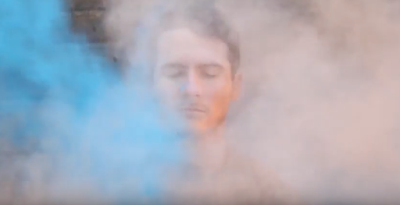 As you can see, we have used these conventions in order to create a website that really fits well withing the genre and personally i find that it is instantly recognizable as a metal or rock band website.

1B: "How do your products represent social groups or issues?"

In order to answer this question, I have created a radio interview. My sister plays the role of the interviewer while i was a producer for our music video.


AGE
Another important aspect of social groups in the media is age.
All of the characters present in our music video are between the ages of 16 and 20. As you can see, this is not a very large age range. This may be an issue as older fans could feel like they're not being noticed appreciated or represented enough or correctly. Our Target audience: 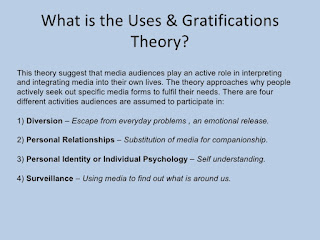 The uses and gratifications theory is a theory that discusses the ways in which an audience view a media text and what they intend to take away from it.

I would argue that our fans/audience would mainly use our video as a means of diversion and personal relationships.

They could use the band members as a substitute for companionship, as well as imagining themselves in the female protagonists place.
They could also use the video in order to feel represented and 'less alone' particularly if they have experienced a breakup or gone through difficult times, as represented by the narrative: which features a male and female character fighting and a male character (lead singer) appearing to go crazy and run away from his problems. 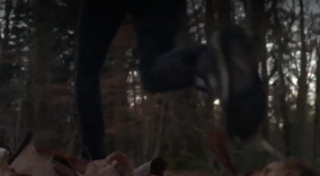 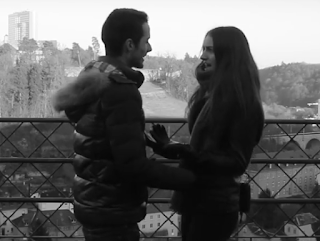 Here is the script that i created for us to follow. I tried to include some theories/theorists into this question as much as possible. 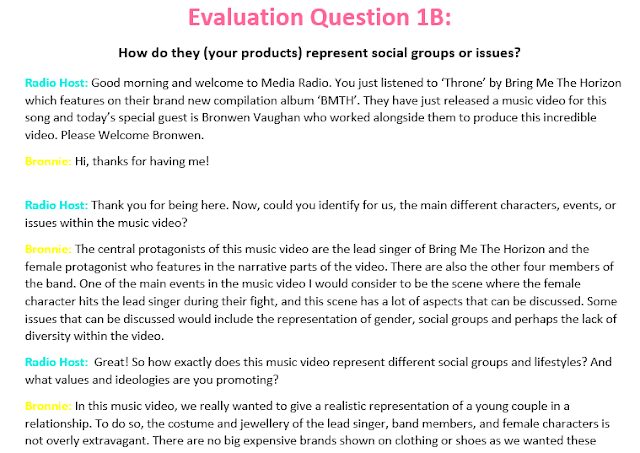 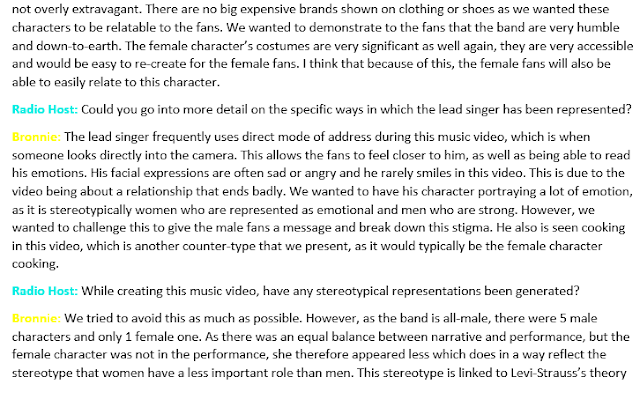 How do the elements of your production work together to create a sense of "branding"?

In order to answer this question, I created a PowerPoint. I uploaded it to Slide-share so that i could embed it into this blog post.

ADVERT
This is an 'advert' that I created to promote the digipak. This advert would appear in magazines, on social media and on posters. Advertisement is a key factor in attracting an audience. This advert also helps really cement the distinctive branding of the band and new album and helps all elements such as digipak, website and social media to further tie together. 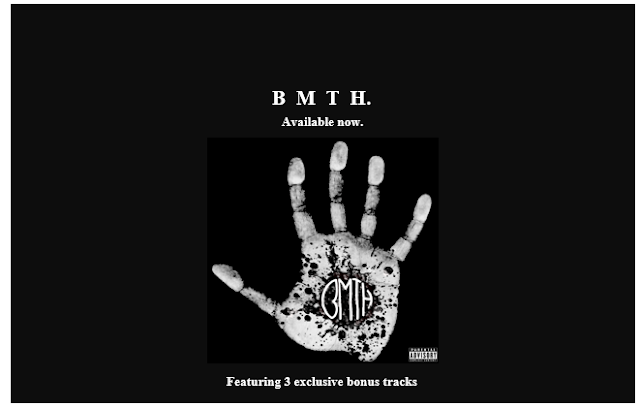 This video is of me acting as someone working for a magazine who has created this advert for the magazine. I talk a little bit more about branding.


Here is the script I wrote for the video, which i added some images to, which will hopefully help to explain the points made. 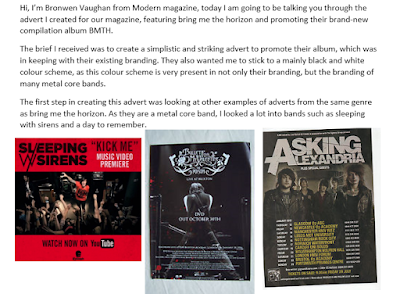 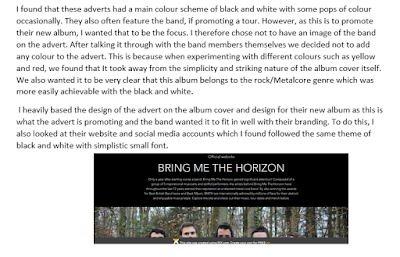 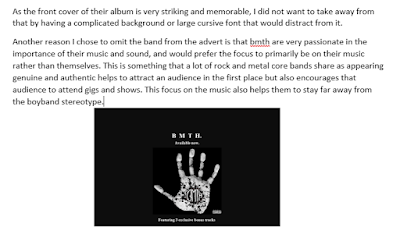 How do your products engage with the audience?

This is a Prezi that I created in order to answer this evaluation question.